The city floating in the Atlantic ocean

Kristiansund has a stunning location and is a beautiful, clean and open city that spreads out around a harbour and four islands. It has one of Norway`s most unique seaports situated right on the ocean`s edge.

Kristiansund was rebuilt after a devastating bombing during the Second World War when almost 900 houses burned down. The new town has developed its own style with bright, colourful houses. Note how the houses in the centre of Kirkelandet are side-gabled, just like the traditional clipfish wharves. To get a feeling of the city’s distinctive character, a visit to the old town of Innlandet is recommended.

Kristiansund is close to the famous Atlantic Road,acclaimed as one of the most amazing road trips in the world.

Kristiansund is often referred to as the “opera city”, and for a good reason: the city hosts some 100 opera performances and an Opera festival each year. Its festival program includes the Nordic Light Photo Festival, the Clipfish festival, the Tahiti festival, and the Kristiansund Church Art and Culture Festival.

Kristiansund is also Norway’s clipfish capital. Any menu in the city’s restaurants and cafes reveals that this tradition is still very much alive today. We recommend a taste of “fishan” – a local version of fish and chips and a Kristiansund speciality.

Everyone who has been to Kristiansund has heard of the harbour ferry, Sundbåten, one of the oldest public transportation vessels in the world in continuous use.  Sundbåten takes you on a 20 minute round trip to the four Kristiansund islands. A great way to see the town.

Click here to get more information about attractions and adventures in Kristiansund.

You can travel from Bergen – Lerwick – Kristiansund. Book your voyage here.

You can also travel from Kristiansund – Bodø. Book your voyage here.

Travel to and from Kristiansund

There are daily express buses from Trondheim, and further bus connections from Molde and Ålesund. You can also reach the main attractions in the area by bus

Drive to Kristiansund on the E39 and Rv 70 from Bergen or Trondheim. We recommend that you driva via the Atlantic Road, which is one of Norway’s National Tourist Roads.

Kristiansund Airport Kvernberget is only 10 minutes by car from the centre of Kristiansund. There are daily departures to Oslo, Bergen and Trondheim.

Order your voyage before January 31. and get 10% discount. 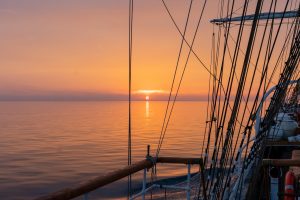 This website uses functional and analytical cookies in order to offer you an optimal user experience. These cookies do not contain personal information. Christian Radich and its partners use cookies in marketing and to ensure that you see relevant advertisements without telling advertisers who you are. By agreeing below, you consent to the use of these cookies.

You can adjust all of your cookie settings by navigating the tabs on the left hand side.

Functional cookies are necessary to use the primary functions of the website. For example, to memorize language settings, but also to prevent the website from being overloaded. These cookies are always used and are necessary for the operation of the website. The information collected by these cookies is not used for marketing purposes. In addition, we use functional cookies to detect website abuse, and for services, such as for example, registering a number of consecutive failed log-in attempts. We do not need to request permission to place and read these cookies.

Functional cookies should be enabled at all times so that we can save your preferences for cookie settings.

If you disable this cookie, we will not be able to save your preferences. This means that every time you visit this website you will need to enable or disable cookies again.

This website uses analytical cookies with which we anonymously collect and report data with the aim of better understanding visitors on our website. We use this information to improve our website. This information will not be used to create personal profiles.

We use Google Analytics to collect visitor statistics to further improve the site. A data editing agreement with Google has been concluded for this. Data exchange with other Google services is disabled and IP addresses are anonymised.

Please enable Strictly Necessary Cookies first so that we can save your preferences!